Back to all Insights

During 2020, COVID-19 wreaked havoc on the global economy, causing global GDP to contract by an estimated 4.4%. However, China, the original epicenter of the outbreak and first economy to be affected by it, was a notable exception. China registered 2.3% annual GDP growth, making it the only major economy to report positive economic growth during the year.

This is not to say that it was smooth sailing for the Chinese economy last year. After recording a 6.8% GDP contraction in the first quarter, the Chinese economy made a sharp U-turn and returned to 3.2% growth in the second quarter. In the third quarter, GDP rose to 4.9%, and in the fourth quarter GDP was 6.5%, returning the economy to pre-pandemic levels.

China’s COVID-19 economic recovery was driven by a combination of factors.

According to Congressional Research Service, China’s fiscal measures and financing plans amounted to $740 billion, or 4.7% of its GDP, as of November 2020. The government increased its budget deficit target to a record high of 3.6% of GDP, up from 2.8% in 2019. Other important growth factors initiated by the government included: massive investment in infrastructure, real estate and epidemic control, improved unemployment insurance and additional tax relief. China also experienced an export boom driven by strong global demand for medical supplies, medical equipment and stay-at-home electronics.

China’s economic recovery, while swift, has ultimately been uneven in terms of its contributing factors. The recovery, as illustrated by the below chart, relied heavily, as stated above, on investment. While domestic consumption, one of the driving forces behind China’s economic growth during the past 10 years, is still lagging historical norms.

That lack of consumption is concerning for an economy that Beijing is trying to support with domestic goods, rather than imports. Also, the reliance on government spending and investment and lack of domestic consumption calls into question the sustainability of China’s economic recovery.

For these reasons, the sustainability of China’s economic recovery in 2021 will require a shift in the sources of growth toward domestic consumption. China appears poised to accomplish this. According to Morgan Stanley, China should expect consumption to increase 12.4% year-on-year in 2021, playing a larger role in driving growth than exports and infrastructure investment.

According to the World Bank, China’s GDP is expected to be 7.9% in 2021. Assuming this is achieved, it would be China’s highest rate of growth since 2012.

There are a confluence of factors that are projected to contribute to this growth assumption, including the following:

Consumption, which trailed investment and exports for a majority of 2020, is expected to recover quickly and become the main driver of China’s economic growth.

In 2021, China is expected to take multiple steps to ensure this occurs. Ning Jizhe, Deputy Head of China’s National Development and Reform Commission stated China will unveil measures to nurture new types of consumption, phase out some administrative rules that restrict consumer purchases, build brands for elder-care, childcare and housekeeping services. The rise in consumption is expected to be supported by stronger labor markets and sustained income growth, as well as a gradual decline in precautionary savings amid improved consumer confidence. 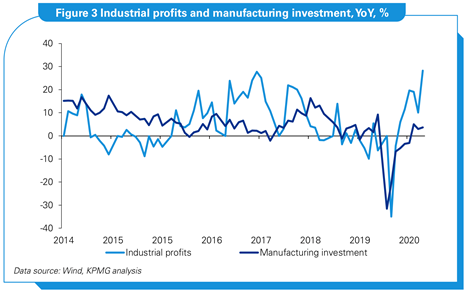 Customers abroad who were afflicted by the pandemic drove a large part China’s manufacturing recovery. As a result, according to Nomura, China’s global export share increased to over 13% in the second and third quarters from 11% the year prior, the highest level since 2006 when the investment bank started compiling this data.

This trend is expected to continue due to global demand and because the guidelines of China’s upcoming 14th Five Year Plan (FYP), covering 2021-2025, emphasized manufacturing as an essential driver for China’s economy.

The coronavirus pandemic and trade tensions have illustrated the risks of over-reliance on China, prompting several countries to consider diversifying supply chains. According to KPMG, however, a huge and rapidly growing domestic market, broad industrial base, high-quality infrastructure, and continuous opening-up policies all make China an attractive destination for foreign investment and a high priority for multinational corporations.

As indicated in the Bloomberg chart below, FDI in China was expected to reach an all-time high level in 2020. 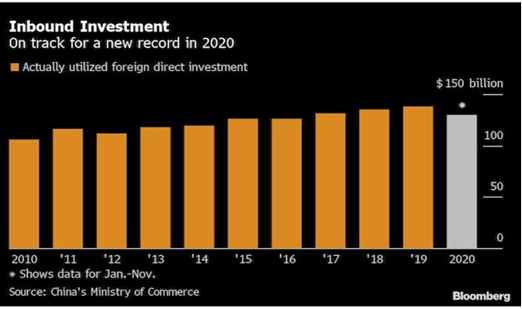 Increasing FDI in China is expected to continue in 2021. The reason for this is simple. According to the Rhodium Group, U.S. and other foreign firms will continue to invest in China as it remains one of the most resilient economies during the global pandemic. Additionally, future growth potential remains stronger in China than most other major economies.

The main downside risk, according to the World Bank, arises from a prolonged pandemic, triggering recurrent outbreaks at a wider scale and causing significant economic disruption both in China and the rest of the world. Should this occur, it is not unreasonable to assume that incomes, revenues and profits in China would drop, resulting in a lack of consumer confidence and uncertainty in a manner similar to what occurred in the first quarter of 2020.

That being said, China appears to have instituted safeguards to combat some of these potential pitfalls.

For instance, in October 2020, at the fifth meeting of the Chinese Communist Party’s 19th National Congress, the parameters for China’s 14th Five Year Plan (2021–25) were set forth. One of the key elements discussed at the plenum was the concept of “Dual Circulation.”

Dual Circulation is a reference to the manner by which the Chinese economy has evolved over the past 30 years. During this period, China has engaged with the global economy through international trade, investment and foreign development. Going forward, China will continue to engage the international community but in response to current geopolitical tensions, “domestic circulation,” which calls for a focus on the growth and development of domestic markets, will be emphasized.

Additionally, in its continuing efforts to combat the future potential threats presented by the COVID-19 pandemic, the People’s Bank of China announced that it will prioritize a stable monetary policy in 2021. Under this protocol, China will only nominally role back some of the stimulus measures institute in 2020, and any steps to do so are anticipated to have only a small impact on the economy. Also, China will continue to provide financial support to small firms and invest heavily in technological innovation and green development.

Looking forward, China’s economic recovery, which began in the second quarter of 2020, is nearly complete. Nevertheless, its sustainability will ultimately be tested by the pandemic and escalating geopolitical tensions. Projected growth in consumer consumption, manufacturing investment, foreign direct investment, in addition to a stable monetary policy and an emphasis on developing domestic markets, will likely insulate the Chinese economy from these issues and result in further economic growth in 2021.

Bank of China USA does not provide legal, tax, or accounting advice. This article is for information and illustrative purpose only. It is not and should not be regarded as “investment advice” or as a “recommendation” regarding a course of action, including without limitation as those terms are used in any applicable law or regulation. Bank of China USA does not express any opinion whatsoever as to any strategies, products or any other information presented in this article. This article is subject to change without notice. You should consult your advisors with respect to these areas and the article presented herein. You may not rely on the article contained herein. Bank of China USA shall not have any liability for any damages of any kind whatsoever relating to this article. No part of this article may be reproduced in any manner, in whole or in part, without written permission of Bank of China USA.